You’ve probably seen or heard this recently, if you’re also a fellow dessert connoisseur. The coveted Museum of Ice Cream may be a more popular attraction at the moment than the Broad (LA, you never cease to amaze me). Fortunately my assistant (Kendall) and I managed to get tickets, along with the insider’s scoop (pun intended). The detail that went into planning this museum is mind-blowing. Every aspect – down to the employees wearing all pink to match the all pink building  – was clearly thought-out, and just downright impressive. Come along our virtual tour to see for yourself! 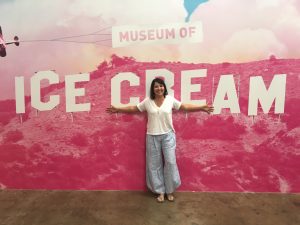 If “Instagrammable” was a word, this would definitely be one of the most ‘grammable museums that I have encountered; you’ll find patrons everywhere doing just that.

From the moment you step on the property, you are met with an ambiance that quite literally screams for ice cream. The floor had stepping stones on the ground in the shape of an ice cream cone. Our “tour guide” (who quickly left us to roam the museum on our own) was hilarious and managed to keep in the spirit of ice cream the whole time – almost like Disneyland, but less crazy.

The first stop is a pink room of pay phones. When you answer the phone, Seth Rogan is on the line explaining aspects of the museum. Seth Rogan! He’s such a hilarious dude and the room made for a cute photo-op, obviously.

Next up – a Hollywood-gone-ice-cream themed room, and the puns were spectacular. My personal favorite was a Hollywood Walk of Fame, featuring celebrities on stars, a la mode! Scoop Dogg is pictured here, but this is just one of many including: Cherry Seinfeld, Nat King Cone, Cone-An O’Brian, and the Fresh Pint of Bel Air. Have I mentioned that I love McConell’s ice cream in my previous posts? Well, lucky for me, that’s the ice cream that was served in this very room. +1 for Ice Cream Museum.

A Museum of Ice Cream sign replaced the famous Hollywood counterpart (pictured at the top of this post), which could be a sweet change. Jerry Brown, can we make this happen in real life? Behind curtain number two – a super cute display of the sun setting on Venice Cream beach. The palm tree bark was made up of ice cream cones. It’s all in the details, baby! 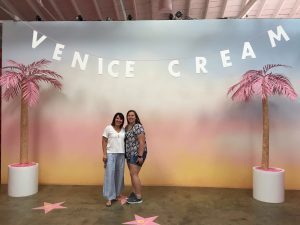 In another exhibit, we took a snapshot of the wallpaper because we thought the bananas were cute, but then the museum worker relayed that the walls were – in fact – scratch and sniff. Let me repeat that for added effect, SCRATCH AND SNIFF wallpaper…did we just get transported to 1971’s Willy Wonka’s Chocolate Factory? Augustus Gloop, where you at? 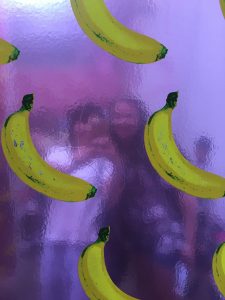 We then swung on an adorable swing set that Beyonce has used herself. In other words, we’re kind of a big deal now.

Mint Chip had its own exhibit – a whole room to itself! Featuring Mint Chip Mochi, which offered a whole farm of mint plants. Again, every detail was considered. The watering cans were labeled “Mint chip H2O” and the “soil” the mint plants were planted in was actually cocoa shavings. How cool is that?

The museum was also a learning experience, as much as it was fun. Check out the quote below that I totally dug. 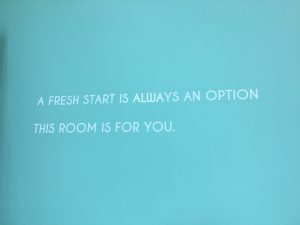 The rainbow theme left me dreaming about sherbet (but who doesn’t already?) 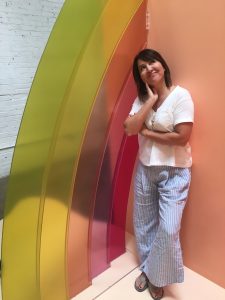 Do you know how Pinterest features that DIY craft in which you melt crayons to get a totally radical design and pattern? This museum sort of replicated this project, but their medium was (of course) colorful, melting, giant popsicles. Emphasis on the “giant”. 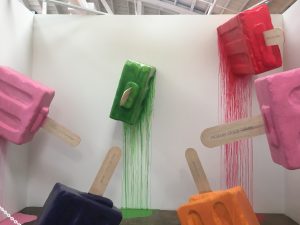 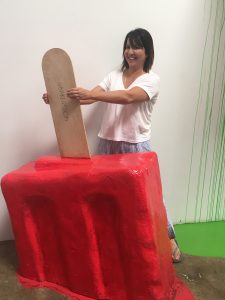 Gummy bears are an all-time kiddo favorite. One room was dedicated to the love of candy, which almost had me falling to my knees in joy. It was too much goodness in one place. 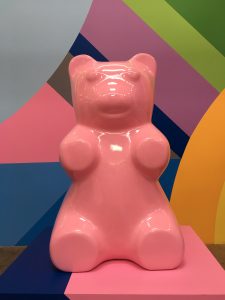 Next up? A room that had black and white ice cream cones smashed all over the wall. We were given a cookie dough flavored, charcoal activated scoop of ice cream(?) on a cone that matched the aesthetic of the room. Super interactive, and tons of fun.

Do you like sprinkles? I absolutely LOVE sprinkles and their endless possibilities. This room fed that love. There was a 4-foot pool of sprinkles with a diving board, and you were allowed to – quite literally – swim through the sprinkles.

I’m about to dive in…

After our swim, we finished with the last room, which featured skillets full of pancake desserts. It was two pink (naturally) pancakes with a scoop of ice cream in-between them, creating the look of butter on pancakes. 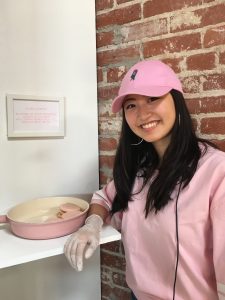 This room also had a ping pong table, and a swing that was shaped like a Neapolitan ice cream sandwich.

Just like Disneyland, you exit through a gift shop. Unlike Disneyland, this gift shop was a blast to walk around through, and featured almost too many different sweet kitchen goodies and treats that would make any dentist cringe.

If you couldn’t tell, we truly loved our experience. It was one-of-a-kind, and so cool of LA to feature. For all of those who can’t make it, this post is for you! 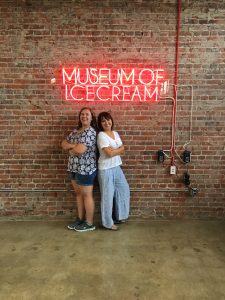 10 Ways To Sweetly Chill Out This Summer

10 Recipes to Kick-Off the 4th of July 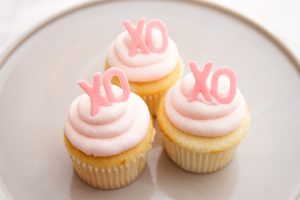 Smooches & Hugs This V-Day with our Easy XO Cupcakes 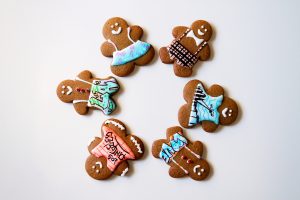 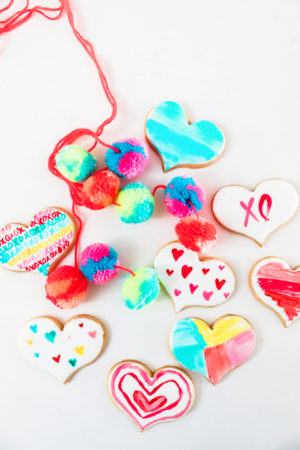 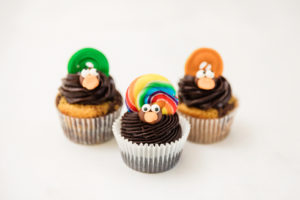