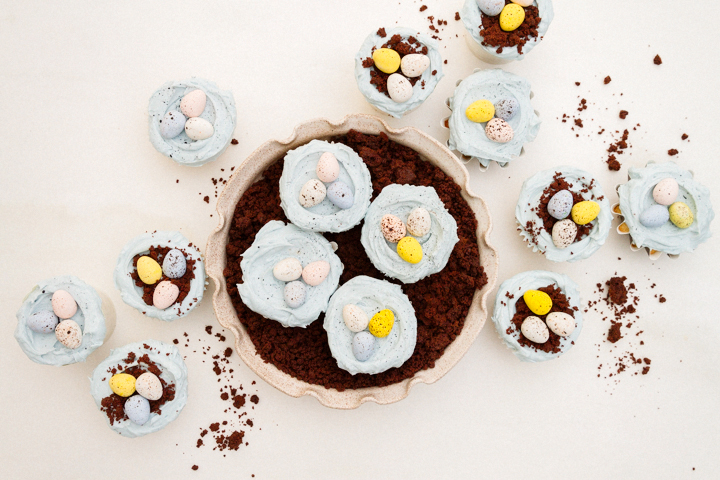 2Spread the clusters on a parchment or Silpat-lined sheet pan. Bake for 20 minutes, breaking them up occasionally. The crumbs should still be slightly moist to the touch at that point; they will dry and harden as they cool. Let the crumbs cool completely before using in a recipe or eating. Store in an airtight container, they will keep fresh for 1 week at room temperature or 1 month in the fridge.

2On low speed, stream in the buttermilk, oil, and vanilla. Increase the mixer speed to medium-high and paddle for 4 to 6 minutes, until the mixture is practically white, twice the size of your original fluffy butter-and-sugar mixture, and completely homogenous. Don't rush the process. You're basically forcing too much liquid into an already fatty mixture that doesn't want to make room for the liquid. Stop the mixer and scrape down the sides of the bowl.

3On very low speed, add the cake flour, baking powder, and salt. Mix for 45 to 60 seconds, just until your batter comes together and any remnants of dry ingredients have been incorporated. Scrape down the sides of the bowl. If you see any lumps of cake flour in there while you're scraping, mix for another 45 seconds.

4Spray a quarter sheet pan with cooking oil spray and line it with parchment, or just line the pan with a Silpat. Using a spatula, spread the cake batter in an even layer in the pan. Give the bottom of your sheet pan a tap on the countertop to even out the layer. Sprinkle the chocolate chips evenly over the cake batter.

5Bake the cake for 30 to 35 minutes. The cake will rise and puff, doubling in size, but will remain slightly buttery and dense. At 30 minutes, gently poke the edge of the cake with your finger: the cake should bounce back slightly and the center should no longer by jiggly. Leave the cake in the oven for an extra 3 to 5 minutes if it doesn't pass these tests.

6Take the cake out of the oven and cool on a wire rack or, in a pinch, in the fridge or freezer. The cooled cake can be stored in the fridge, wrapped in plastic wrap, for up to 5 days.