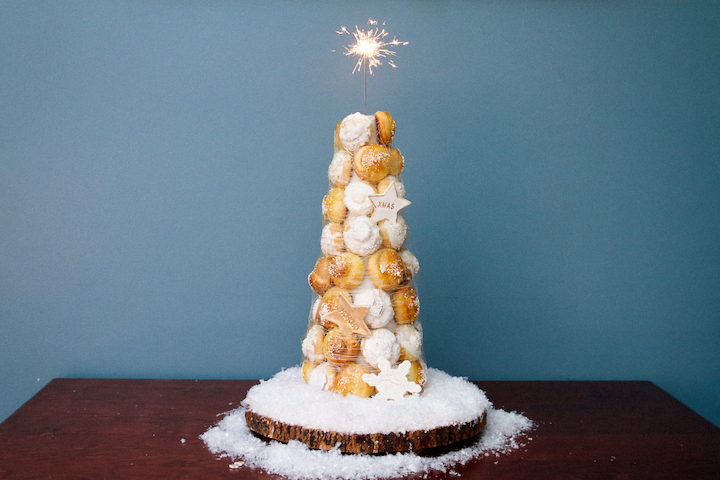 By TheSweetNerd  Cremes and Puddings

This recipe requires 3.5 of time.

1Combine milk, butter, sugar, and salt in a saucepan and bring to a boil over high heat.

2Reduce the heat, and add flour all at once and stir vigorously. Cook stirring constantly with a wooden spoon, until the dough begins to come away from the sides of the pan (about 7-10 minutes). The goal is to release the steam from the wet dough (as much as possible).

3Transfer to the bowl of a standing mixer fitted with the paddle and beat at medium speed until cooled to body temperature. Add the eggs, one at a time, beating well after each addition and scraping down the sides of the bowl with a rubber spatula. Beat in the egg whites. Add extra if needed until dough is the right consistency (use drip method to determine readiness).

4Transfer dough to a piping bag with a 1/4 inch open round tip.

5On a piece of parchment paper, trace 1 1/4" - 1 1/2" circles. Next, flip over paper and pipe the dough starting at the center of the traced circle working your way outward until it forms a mound and reaches the outer circle.

3Temper the egg mixture by gradually adding about 1/3 of the hot mixture, whisking constantly so the egg doesn’t cook. Return this mixture back into the saucepan and continue cooking over medium heat, vigorously stirring with a whisk, until the mixture comes to a boil and the whisk leaves a trail in the pastry cream, usually about 5-7 minutes. Remove from heat, stir in the vanilla and the butter, and cool over an ice bath.

4Optional: For a lighter filling, you can fold in whipping cream. To make the whipping cream, whip 3/4 cup cold heavy cream + 1/4 cup sifted powdered sugar until stiff peaks form. Next, fold this into the pastry cream. Refrigerate for up to 3 days.

1To make the caramel: In a medium saucepan, combine 2/3 cup water, sugar, and corn syrup, and bring to a boil over high heat until syrup is amber in color. Remove from heat. Dip side of each puff into the caramel, and arrange puffs by rows. (If sugar is still clean, you can rewarm once on low flame to liquify.) For the assembly, make a fresh batch of caramel. Dip a fork into the caramel and let most of the sugar drip off the fork. Then, spin the cake turntable while threading the sugar around the puffs. This will help create a web. Continue this process until you have reached your desired sugar web. Serve immediately.

4Now drizzle the remaining water as needed until it becomes a thick like honey consistency.