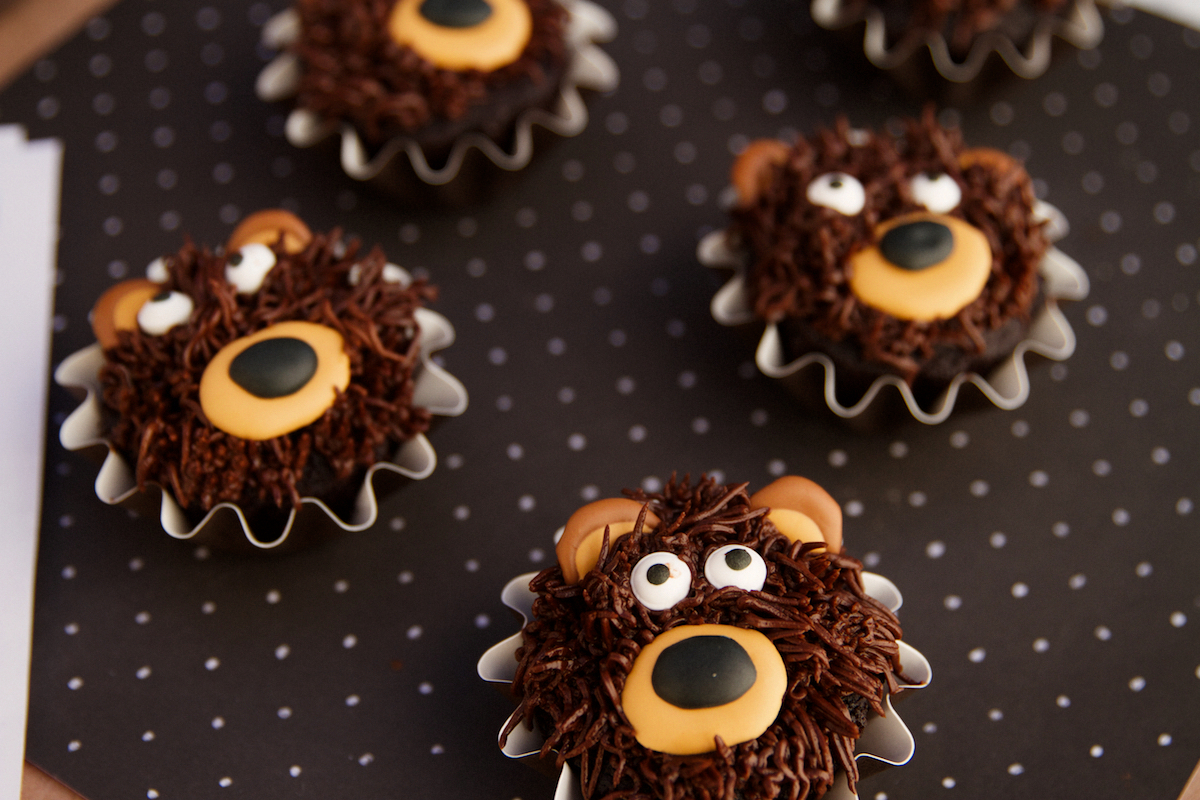 1Preheat the oven to 350 degrees. Line tins with baking papers.

2Place a large bowl over a sauce pan and gently simmer chocolate and butter. Remove from heat. Whisk in the sour cream and vanilla until well combined.

3Add the flour mixture and whisk until evenly combined. Fill until a skewer inserted in the middle of a cupcake comes out clean.

1Make a double boiler to gently melt the chocolate by setting a small stainless steel bowl over the top of a small saucepan filled with a couple of inches of water over low heat. Put the chocolate in the bowl, and use a rubber spatula to stir the chocolate occasionally. Scrape the sides of the bowl so the chocolate doesn't burn. When it's almost completely melted, remove the bowl from the pan and continue stirring until all the chocolate has melted. Set the bowl aside and let the chocolate cool until its just slightly warm.

2In the bowl of a stand mixer fitted with the paddle attachment, cream the butter. Start with the mixer at the lowest speed, then gradually increase the speed, using a rubber spatula to scrape the bowl as needed, until the butter is light in color and perfectly smooth, and makes a slapping sound as it hits the sides of the bowl. If the butter is soft, this should only take 30 seconds, but if the butter is cool, it can take a couple of minutes.

3Add the sugar, 1 cup at a time, and mix at the lowest speed until it's fully incorporated before adding the next cup. When all the sugar has been added, scrape the paddle and the bottom and sides of the bowl.

4Add the vanilla and salt, and beat at low speed for 30 seconds.

5Turn the mixer off, scrape the sides of the bowl, and then add the melted chocolate. Start by beating on low speed for about 15 - 30 seconds to incorporate the chocolate. Then, increase the speed to as high as you can without making a mess, and whip the buttercream until it is perfectly smooth, creamy, and light, about 5 minutes. Stop the mixer once or twice to scrape the bowl and paddle, then continue beating. At first the buttercream will appear to soften, then it will stiffen and increase in volume.

6Use right away or refrigerate in an airtight container for up to a week. When you're ready to use it, let the buttercream come to room temperature, then put it in the stand mixer and beat with the paddle attachment until creamy and stiff again.

2In the mixer (using the paddle attachment), gently mix confectioners sugar and meringue powder on low.

4Now, drizzle the remaining water as needed until it becomes a thick-like honey consistency.